Russian Salad is known by several names such as “Ensalada Rusa” or “Olivier Salad” or “Salad Olivieh”. This is a simple salad invented in the 18th century by Lucien Olivier and widely recreated throughout Eastern Europe. Over the course of the centuries, different regions of Eastern Europe have developed their own variations of this salad but few core ingredients are common to them all: potatoes, eggs, carrots, pickles, onions, peas, and a mayonnaise-based dressing.

ORIGIN OF THE RUSSIAN SALAD

Russian Salad (Ensalada Rusa) was originally invented by Lucien Olivier for a Moscow restaurant called Hermitage in the 1860s. It became very popular in Russia and can now be found in any restaurant across the country. It’s traditionally served on any Holiday, gatherings, birthday parties etc… The local variations can be found in almost any Eastern European Country from Ukraine, Bulgaria to Poland and Hungary.

In Poland, this salad is called “Salatka Jarzynowa”(which translates to a vegetable salad). I learned how to make it in Elementary School. Once a month we would have a class where we needed to bring all the ingredients necessary to make a salad (already cooked) and then we’d chop it up and assemble it. We would bring knives to school to chop the ingredients. Nowadays this sounds crazy, but I guess this was a different era.

WHAT INGREDIENTS ARE NEEDED TO MAKE RUSSIAN POTATO SALAD

The list of Ingredients for this Russian Olivier Salad is very short and you may have already everything needed in your pantry:

The preparation of the Russian Salad is very simple, however, it will require a few steps and some extra time, because vegetables and eggs need to be cooked and cooled off before the chopping.

Step 1: Place eggs in a pot of cold water. Bring to a boil and cook for 10 minutes. Remove the eggs from the water and let them fully cool off before peeling.

Step 2: Place whole, unpeeled potatoes, and carrots in a pot of water. Add a teaspoon of salt and bring to a boil. Cook until vegetables are fork tender for about 20-25 minutes. Remove from water and let cool off fully before peeling.

Step 3: Peel and chop the pickles (peeling is optional; I feel like they taste better in this salad without tough skin).

Step 6: Peel and chop into cubes eggs, potatoes, and carrots (if using, cube your ham too).

Step 7: Place all the ingredients into a large bowl and mix all together.

Step 8: In a small bowl combine mayonnaise with mustard and pepper. Add it into the salad ingredients and mix all together. 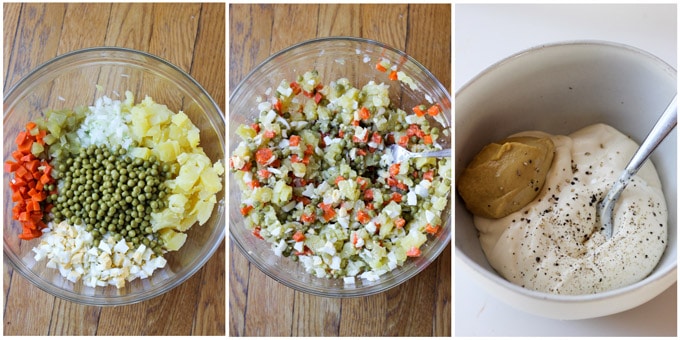